Diagnosis and treatment of diseases associated with abnormalities of Complement System 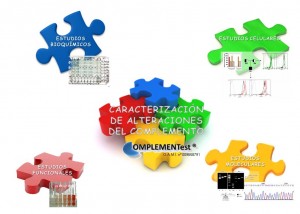 Complement group of Hospital La Paz has a 20-year experience in research and treatment of complement system-related disorders. Located in one of the largest hospitals of Madrid’s Region, Hospital La Paz is acting as National Reference Centre for the diagnosis of primary complement immunodeficiencies and activation-consumption situations mediated by autoantibodies directed against specific complement components. In this context, this group has set up the technology for the detection of complement deficiencies affecting either classical (C1, C2,…C9) or alternative (CFB, CFD) cascades proteins and regulators (C1Inhibitor, Properdin, CFH, CFI) and for the molecular characterization of C1Inhibitor, C5 and CFI genetic defects. The group’s interests on complement are also focused on the identification and characterization of autoimmune disorders, including anti-C1Inhibitor, anti-C1q, anti-CFH autoantibodies and nephritic factor. Besides, due to its PI’s wide expertise in the field, the complement group of Hospital La Paz receives clinical samples and frequent consultation from clinicians all over the country. 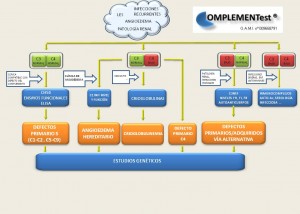 Since 1983, the group has developed a screening model for complement deficiencies and/or complement-related alterations. Between 1984 and 1992, several lab members have published a number of scientific papers related with the C3Nef autoantibody (see CV of the PI). Furthermore, during those years, the first C7 deficiency in the Spanish population was described by members of the Complement group.

In 1999, a new research line, focused on the screening of C1Inhibitor defects associated with Hereditary Angioedema (HAE), was started. As a result of this effort, the first census of patients affected of this rare disease in Spain was published. This patient’s census has allowed a better diagnosis of HAE by Spanish clinicians and the identification and characterization of the first three homozygous individuals ever described worldwide (a genetic condition considered embrionically-lethal) until then.

The close collaboration, started in 1999, with members applying for this consortium, mainly with Drs. Sánchez-Corral and Rodríguez de Córdoba, has contributed to a better understanding of the molecular bases of pathologies such as the Haemolytic Uremic Syndrome (HUS) and Dense Deposit Disease (DDD). In this

sense, the characterization of the first HUS patients with mutations in CFB and CFI, the establishment of a specific functional assay for patients affected by this disorder and the identification of the first case of DDD due to C3 mutations have been important milestones.

The Complemento Program, Biology and Physiopathology of the Complement System (S2010/BMD-2316) is one the R+D Activities Programs funding by the Regional Government of Madrid.