The Lymphocyte Immunobiology Group at the Complutense University School of Medicine has a long-term interest in leukocyte physiopathology, with special emphasis in T lymphocytes from both sides of the immunological synapse in all areas of immunopathology (notably immunodeficiency/infection, but also in alloimmunity, autoimmunity and allergy). Our general aim is the study of T cell development, activation and effector functions under inherited or acquired pathological conditions, in connection with both classical and non-classical MHC molecules. With our results we strive to delineate the intricate interactions within and among T cells, and with other leukocytes and tissues, and to transfer our findings into the diagnostic and therapeutic arena. To this end, we analyze mouse models, cell lines and human samples using state of the art cell biology, flow cytometry, proteomic and genomic techniques. We have a proved training record of postdocs, PhD students and technicians in both a clinical and an academic environment, and we manage one of the best Immunology teaching Departments in Spain for most relevant academic degrees (Biology, Pharmacy, Medicine, Biochemistry, Nutrition). 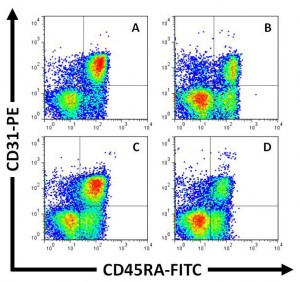 In 1986 we described the first T-lymphocyte specific immunodeficiency, which was later shown to be caused by mutations in the invariant CD3 gamma chain of the T-cell receptor for antigen (TCR). Seminal papers followed on the role of CD3g in T cell selection and TCR structure, dynamics and signalling, as well as diagnostic guidelines and proof of principle for gene therapy in such disorders. In the last 5 years we have made several contributions that have established unexpected properties of CD3 chains, such as their differential biological role in humans vs mice, and their disparate stoichiometry in alphabeta vs gammadelta TCR isotypes in humans vs mice. This led us to the intriguing finding that the alphabeta TCR is topologically different in normal CD4+ vs CD8+ T lymphocytes, which opened the door for T-cell subset-specific immunosupression. Human T cell disorders require appropriate in vitro models, of which we have made use also in recent years for congenital as well as acquired immunodeficiencies. More recently, we have become interested in nuclear supervision of DNA rearrangements by lymphocyte precursors and in the role of T cell accessory molecules in leukocyte biology. In this regard, we have shown that GITR signals selectively expand Treg lymphocytes, which may have therapeutic implications, and that SLAM/CD150 is also a bacterial sensor, analogous to the TLR family, which may thus enrich TCR signals and regulate T cell differentiation and effector functions. We have also first described two interesting features, with clinical implications, in connection with NKT and intestinal MAIT invariant lymphocytes and their respective non-classical MHC class I molecules CD1d and MR1: the lysis susceptibility/protection balance of Leishmania-infected dendritic cells by NKT/NK cells depends on the upregulation of CD1d/HLA-E ligands, and MR1 is expressed by IgA-producing intestinal plasma cells. This has increased our interest in intestinal inflammation, which builds upon previous work on the impact of warm ischemia in kidney inflammation and allogeneic transplant rejection. Lastly, our major higher educational achievements include a recent Aneca-certified Master´s degree in Immunology and an Immunology PhD program, which holds since 2003 an excellence record by the Ministry of Science.

Therefore we believe we are well prepared to contribute to the research objectives of the consortium with a cellular immunology perspective, and to the educational and visibility objectives with our academic expertise, as detailed in the program.

The Complemento Program, Biology and Physiopathology of the Complement System (S2010/BMD-2316) is one the R+D Activities Programs funding by the Regional Government of Madrid.